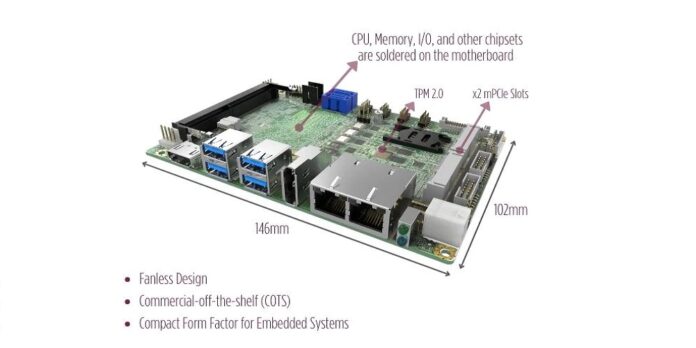 What is a fanless single-board computer? A person who has any kind of tech background will be aware of what is a single-board computer but to a layman, this is a completely vague term. This computer is mostly known as SBC (single-board computer) and it is a computer system that is based on a single silicon board. Single board computers usually have a GPU (graphic processing unit), CPU (central processing unit), and I/O(input/output) ports that are a part of the board. They also come with RAM that cannot be upgraded in the future. However, in the case of the other computers, the users can upgrade their Ram with the help of the socket. Additionally, it should be known that in the fanless single board computer additional input/outputs and storage devices can be added if you want to.

Classification of single board computers

These single-board computers come in every shape and size. However, one of the most popular sizes is 3.5inch and 2.5inch SBCs. These are minimalistic computers, thus they have a very unchanging structure that helps to ensure the performance and makes sure that the performance stays consistent while the user uses critical applications that also require day and night operations under very harsh environments. The Single board computers that are used in industries also can operate both on the windows 10 loT and the Linux OS.

Difference from other full-sized computers

The SBCs are different from full-sized computers as all of their components are attached to a single board, and many of the components are fused down to the board. This is a very different type of computer from that of a desktop computer as many of its components are added to the motherboard via sockets. When we talk about the normal desktop computer it mainly involves connecting a GPU to the motherboard via a socket. The graphics processing system is also fused onto the circuit board and it cannot be changed or removed in any way. However, any traditional computer has all the sockets on which you can change or update the elements like RAM, ROM, and even processors. But SBCs are more power efficient and used for specific purposes.

The Premio also offers the users 3.5inch SBCs and 2.5inch SBCs which are classified into two types of configuration. It can also be built with the help of the strong intel core i5-8365UE which features four cores that are enabled with hyperthreading. It commonly has a minimum base frequency of 1.6GHz and a maximum turbo frequency of 4.10 GHz which helps with a fast performance at a TDP of just 15W.
When the 32GB DDR4-2400 MHz RAM and the quad-core processor are combined, it adds and increases the capacity of I/O and also gives permission to x4 USB 3.2 Gen 2 (10 Gbps), thus creating a  powerhouse for you. This type of computer is an ideal option for enormous processing power and abundant I/O. One of the additional factors that are attached to this is that it can be built with Intel Celeron 4305UE which includes two cores with the help of a base frequency of 2.00 GHz and also 15W for the TDP.

Different Types of Car Phone Holders in the Market

What is Loading Dock Lift, and Why do You Need One?

Role and Benefits Of Technology in Business